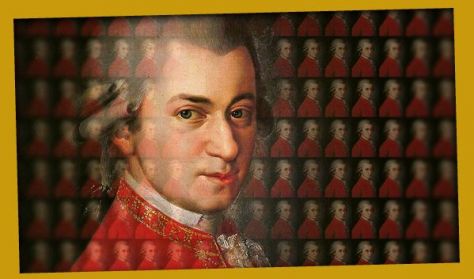 There is general agreement in genre definitions that the concertone is a kind of hybrid or transitional genre between Baroque concerto grosso and the classical symphony, or concerto. The handling of certain instruments or instrumental groups can also be observed in Haydn’s Morning, Noon and Evening symphonies written in 1761, and the method of concertalo writing is typical of the sinfonia concertante (popular at the end of the 18th century). The Concertone in C major scored for two violins and orchestra (in which the oboe and cello also have noteworthy solo roles) was created in Salzburg in 1774 (or perhaps 1773), just prior to the magnificent violin concerto series (1775) comprising five compositions. It is conceivable that Mozart’s experiences in Italy, for instance, hearing works by Giuseppe Sarti and Josef Mysliveček, had an influence on the composer. Mozart actually took the score with him on his trip stopping in Mannheim and Paris in 1777-1778, but we don’t know whether the piece was played in an orchestral concert. However, he did play it on piano at the Wendling family home, where Mozart said the host “remarked that it was just the thing for Paris. When I played it to Baron Bagge, he was quite beside himself.”

The Sinfonia Concertante in E-flat major originally scored for flute, oboe, horn and bassoon was written by Mozart for four instrumental virtuoso friends in Paris in 1778. The composer got to know the artists in Mannheim and planned to present the new work at one of the events of the Concerts Spirituels in Paris. However, the debut was scrapped and all trace of the score lost. Then just a few months later, in a letter Mozart expressed his intention to rewrite the entire composition, but this didn’t happen. We still do not know who drafted the version of the work we know today set for oboe, clarinet, horn and bassoon.