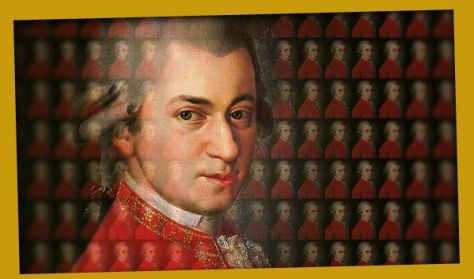 Wolfgang Amadeus Mozart: String Quartet in B-flat major, K. 589
In spring 1789, Mozart spent two whole months in Germany (Dresden, Leipzig, Berlin, Potsdam), and he made no secret of the fact that he wanted to attract the attention of the Prussian royal court. His plans included writing light piano sonatas (for Princess Friderika) and a string quartet series, the latter to be dedicated to the king himself. In the end, relatively little came of the ambitious plans shaped in the course of his tour of Germany. For example, ‘only’ three of the six-series string quartets were ever written. The so-called ‘Prussian Quartets’ finally went to press without any dedication soon after the death of Mozart. Haydn was in awe of these pieces: “If Mozart had written nothing but his violin quartets and the Requiem, they alone would have been sufficient to make him immortal.”

Wolfgang Amadeus Mozart: String Quintet in D major, K. 593
The String Quintet in D major dates from December 1790 in the days when, in Vienna, Mozart met Haydn, who was preparing to travel to London. Similarly to the Prussian Quartets, this work was only published after the composer’s death along with the E-flat major quintet. On the title page of the 1793 edition one can read the mysterious inscription “composto per un Amatore Ongarese”, that is, the works were created for a Hungarian aficionado. There are no Hungarian elements in any of the pieces and it is not known who the ‘Amatore Ongarese’ was. It is possible that it is all a misunderstanding since the work may have been commissioned by Johann Tost, who played violin for a time in the orchestra of Haydn at Eszterháza. Tost quit his career as musician and became a trader dealing (without particular scruples) in works of music. There is an unconfirmed story that in December 1790, Haydn, Tost and Mozart performed the String Quintet in D major as well as other works, with both composers on viola.