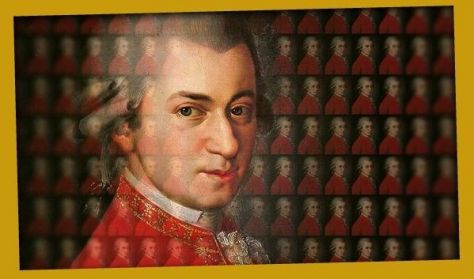 Wolfgang Amadeus Mozart: Sonata in D major, K. 381
In the early 1770s, if Mozart happened to be at home in Salzburg, he wrote works in several genres. Interestingly, however, he did not at that time write piano sonatas or piano variations, instead entertaining residents of Salzburg with piano improvizations. The four-hand Sonata in D major was one exception, which the 16-year-old composer created with joint appearances with his sister in mind.

Wolfgang Amadeus Mozart: Andante with Variations in G major, K. 501
The variation series (five variations) on an own theme dates from 1786. In line with the custom of the age, among the various variation types there is a variation in the minor key (variation No. 4), while the last is a grandiose and technically brilliant finale with surprising key diversion in the coda. Unlike the theme and variations 1-4, Mozart does not repeat the individual lines; the music is characterized by continuous development.

Wolfgang Amadeus Mozart: Sonata in C major, K. 521
Mozart completed the Sonata in C major on 29 May 1787, just one day after the death of his father, Leopold Mozart. Somewhat later he dedicated the piece to Babette and Marianne Natorp, but it was first sent to his dear friends Gottfried von Jacquin and his sister, Franziska. The latter was a student of Mozart and an excellent pianist. In a letter to Jacquin, Mozart noted that one of the parts was slightly more difficult, although the truth is he wrote equally demanding parts for both pianists. The piece, in style and ‘approach’, is close to the composer’s Viennese piano concertos, in a few sections of the work (for example, in the unisons of the first movement) Mozart made every effort to give it expressly orchestral effects. The Andante prefigures the Romanze movement in Eine kleine Nachtmusik composed a few weeks later, while the core rhythm of the rondo finale resembles a gavotte.